Cook County Circuit Court Chief Judge Timothy Evans this week called the circuit court that he heads a national “leader” in embracing a tool designed to objectively assess the danger of releasing from custody people who have been charged with crimes while they await trial.

In a press release issued by his office, Evans cited statistics showing that the number of people ordered to pay cash bail to win their release from custody is dropping as judges use a risk assessment tool, developed by the Laura and John Arnold Foundation. 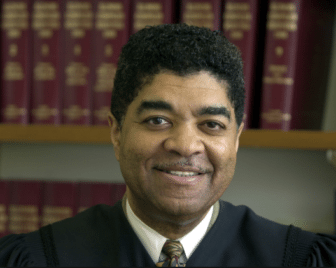 Evans’s statement was released amid growing criticism that too many people are held in custody on nonviolent charges simply because they are too poor to post bond to win release before they are tried. This month a lawsuit was filed on behalf of impoverished detainees held in Cook County Jail pretrial, contending that the system of setting cash bail violates the constitution.

Injustice Watch this month reported how the bail system causes thousands of people to be locked up every day in Cook County though they have not been convicted of any charges, including hundreds accused only of misdemeanors.

Many critics of the system blame judges for too often deciding that people who have committed nonviolent crimes should be held in jail unless they can pay bond – commonly thousands of dollars — to the court to secure their release. In Illinois, defendants are required to post 10 percent of the bail judges set, either with guarantees of property or with cash, to win their release.

Injustice Watch reporters in bond court this summer watched as judges commonly set cash bail despite the defendants being ranked as low-risk of danger or failing to appear in court by the assessment tool. The court has been gradually implementing the use of the tool, which ranks defendants on their likelihood to appear in court or be rearrested on another crime. The sheriff’s office in July reported that judges are frequently ignoring the tool, based on observations over a six-week period this February and March, after the tool had been put into use but before the period studied by Evans’s office.

Evans, in his statement, noted he has been working cooperatively with other county officials to improve the bail system in recent years, and emphasized that the courts seek due process for detainees, rather than “rooting for outcomes.” He said statistics kept by his office showed that judges are more frequently using alternatives to cash bond. In addition, he said in the statement, low-risk defendants in nonviolent cases are being released from custody in more than nine of every 10 cases either without cash bail, on electronic monitoring, or bail was set at a level they could post.

The improvements have not come quickly enough for other officials, including Supreme Court Justice Anne Burke and Sheriff Tom Dart, who have expressed frustration that so many nonviolent offenders are still locked up facing cash bail they cannot afford.

The day the lawsuit was filed, the jail was holding 271 people who could not post $1,000 to be released, and four who needed just $100, according Cara Smith, Dart’s chief policy officer.