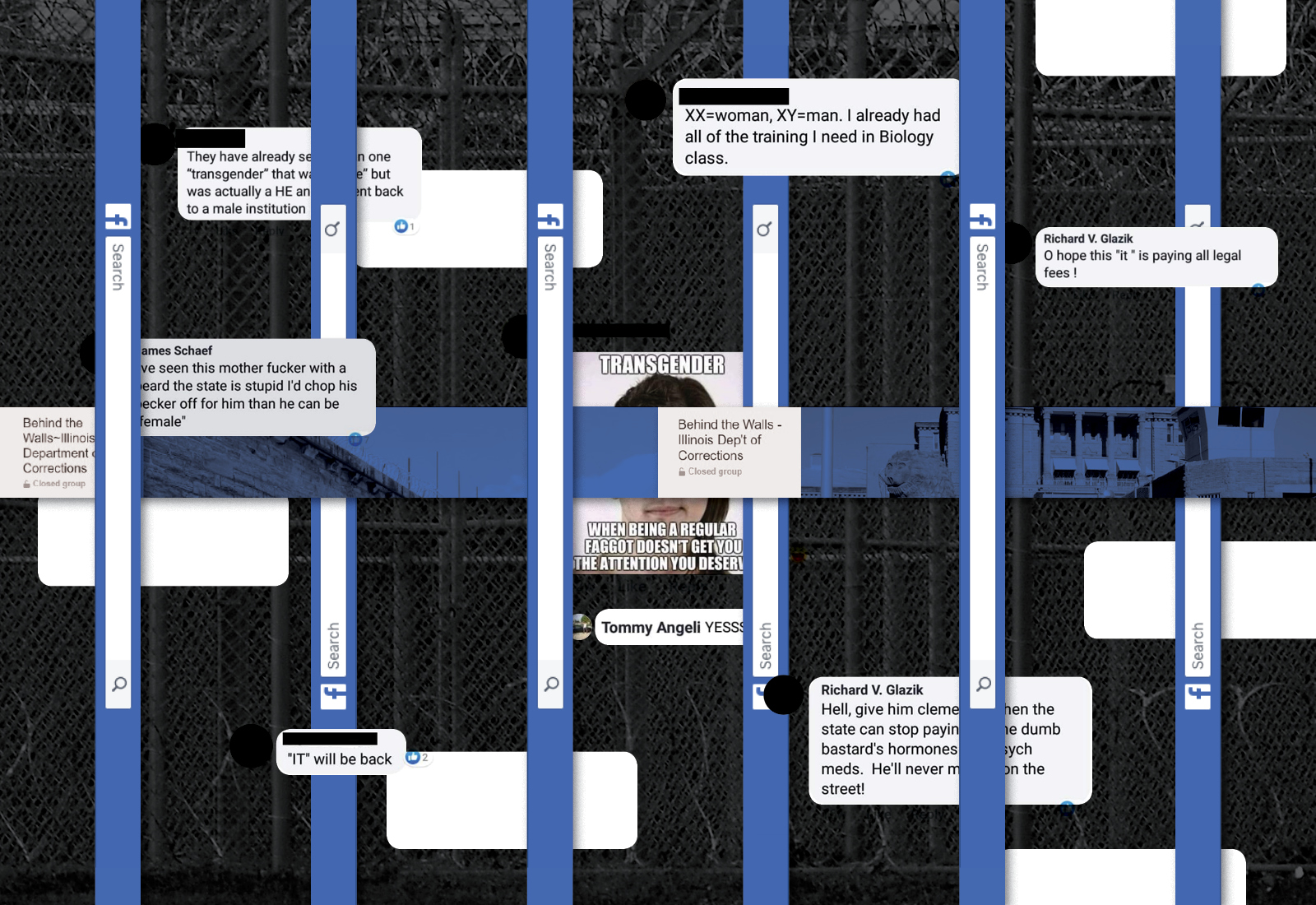 This article is co-published by Buzzfeed News.

CHICAGO — At least 25 Illinois Department of Corrections employees have taken part in online conversations that mocked, demeaned, or disclosed personal and medical information about transgender inmates — including calling transgender women “it” and “he” — in two private Facebook groups, an Injustice Watch review has found.

The posts were written by low-level officers, sergeants, lieutenants, and other correctional staffers — including a counselor and a parole officer — from across the state. The posts included comments degrading transgender women and outing other LGBTQ prisoners. They openly discussed private information about inmates, including alleged sexual acts and medical treatments they received.

The degrading comments are coming to light as the department is embroiled in a series of pending lawsuits, including a class-action claim brought by six transgender women contending they received inadequate medical treatment while in prison.

“I’ve seen this mother fucker with a beard,” correctional officer James Schaefer, who appears on Facebook under the name James Schaef, wrote in one group, after a post was shared last December about the transfer of a then-incarcerated transgender woman, Strawberry Hampton, to a women’s facility. “The state is stupid I’d chop his pecker off for him than he can be ‘female.’”

Many of the discussions in the Facebook group referenced Hampton, who has filed two lawsuits against the department alleging abuse and mistreatment by correctional officers as a result of her gender identity.

Correctional officer Kenneth Mottershaw commented on a news article posted about Hampton in March 2018: “Know matter way you look at it, it’s a freak’n male inmate,” he wrote. “Transgender’s are a fucking joke in my view.”

Another officer, Richard Glazik, wrote of Hampton in early 2018: “O hope this ‘it’ is paying all legal fees !”

Injustice Watch learned of the two Facebook groups —  which explicitly say in their descriptions that they are for current and former Illinois corrections staffers or department-connected people — as part of its continuing examination of troubling posts by current and former law enforcement officers on the social network. The groups⁠ — both named “Behind the Walls” and followed by different spellings of “Illinois Department of Corrections” ⁠— are private, meaning that a moderator must grant access before a Facebook user can view or comment on the posts. Each group has more than 4,000 members.

In one group, members are warned “snitches will be permanently banned from the group. No warnings, no second chances: zero tolerance.”

The individuals named in this story did not respond to requests for comment.

The offensive comments were often left on news stories about the lawsuits shared in the group. The discussions continued despite warnings from other group members that the department’s own internal affairs team or attorneys of those inmates may be watching.

Mark Delia, who investigates administrative and criminal misconduct by staffers as the department’s chief of investigations and intelligence, was a member of both Facebook groups as of September. Delia did not participate in any of the comment threads that were obtained by Injustice Watch, and he declined to comment about his membership in the groups.

Correctional staff members in leadership positions also participated in the private Facebook conversations. In one exchange, correctional officer Jordan Schreiber, who appears on Facebook under the name Kenny Wayne, appeared to mock both a department lieutenant and Hampton, claiming the two looked alike.

The lieutenant, Adrian Corley, responded to the post and explained that they only looked similar because of Schreiber’s vantage point, alluding to the officer performing oral sex on male genitalia on both the lieutenant and Hampton. Corley also referred to Schrieber as a “twink,” a slang term used to describe slender, young gay men.

Jeremiah Varble, a correctional sergeant, commented on a post shared in January 2018, writing about witnessing a transgender prisoner, referenced by a nickname, performing oral sex on male genitalia, at the Logan Correctional Center lockup in 2012. It was an “odd experience,” he wrote. That prison facility houses only women.

Varble also shared a meme in that thread that read “THIS IS SOME GAY SHIT” in response to the post, which was about Hampton’s court request to be moved to a women’s correctional institution. Varble was promoted to sergeant this year, according to state employment records.

After a reporter provided the department with images of posts from nine current correctional employees, state penal officials said they do not tolerate bigotry. In an emailed statement, Illinois Department of Corrections Acting Director Rob Jeffreys said the department is “firmly dedicated to fostering a culture of tolerance, inclusion, and respect in our correctional facilities.”

The department did not act on an offer to meet in person to review the full threads gathered by Injustice Watch, which included posts by 25 employees who had made derogatory or troubling comments about LGBTQ people and several other posts from many more individuals whose identities could not be verified.

In addition to the images of the nine correctional officers Injustice Watch provided the names of 18 other employees, 16 current and two former, by email. The department said the disciplinary process was underway for each of the 25 current staffers whose names were shared.

Jeffreys said in the statement that the department had recently instituted mandatory staff training on implicit bias and transgender care.

Correctional Lt. Anthony Bigger’s comment in response to a post about a judge’s order requiring the department to conduct transgender training in November 2018. Bigger did not respond to requests for comment.

That two-hour program includes education about gender identity, sexual orientation, the harm of misgendering transgender people, and the impact of discrimination, said training creator Dr. Shane Reister. Each of the department’s 12,000 employees will receive the training, which began in July and will take about a year to roll out fully.

Anders Lindall, a spokesperson for the union representing state corrections employees, wrote in an email that while the group provides fair representation of its members, it does not condone or tolerate bigotry.

Lindall said that although working in corrections can be a high-stress job with challenging circumstances, most officers uphold standards of conduct and do not participate in these types of dialogue.

Injustice Watch reviewed hundreds of comments in the two groups dating from October 2017 to September this year. To verify which of the group members who had posted troubling comments were current correctional employees, a reporter reviewed their public Facebook pages and compared their names to a state database of correctional staff members.

Many Facebook users identified themselves on Facebook as correctional officers, posted about their jobs, and shared photos of themselves in uniform. Dozens of other commenters in the Facebook groups also participated in the conversations about LGBTQ inmates. Many of the commenters claimed to be department retirees or had names that matched those of current correctional employees, but they did not independently identify themselves as state workers on their Facebook profiles.

The posts continued even after three state correctional officers were put on leave following an Injustice Watch report in September about posts on their public Facebook pages that mocked members of the LGBTQ community or disparaged homosexuality.

A user in one of the Facebook groups shared a memo that Jeffreys sent to correctional staffers on the heels of that reporting. The director warned that employees are required to be professional, whether on or off duty, and provided examples of inappropriate social media posts, like those that are obscene, threatening, discriminatory, or that disclose private information.

Researchers and experts who study corrections culture expressed dismay at the posts and noted that issues surrounding the treatment of transgender inmates are not unique to Illinois and are cropping up across the nation.

“Our awareness of the, let’s say, prevalence of unique gender identities has grown through the years,” said Martin Horn, a lecturer at the John Jay College of Criminal Justice and former secretary for the Pennsylvania Department of Corrections. “[But] it has not penetrated the consciousness of many corrections staff.”

Although state corrections departments have made enormous efforts to create change in this area, Horn said, correctional institutions are unaccustomed to change, and old habits die hard. Prisons have historically existed in a binary world, he said.

Corrections employees, Horn said, see a world where each inmate can present a unique safety issue. “There is genuine concern about not creating opportunities for one individual prisoner to engage in predatory behavior towards another or to gain advantage by using sexuality as an advantage,” he said.

Research has shown that transgender inmates are more likely than the general prison population to be victims of sexual assault. A 2011–2012 Bureau of Justice Statistics survey found that nearly 40% of transgender inmates in state and federal prisons have reported being sexually victimized by other inmates or staff members.

Dr. Terry Kupers, a psychiatrist and professor at the Wright Institute who has studied corrections culture, said he was disturbed to learn of the Facebook conversations, in part because of the power dynamics at play in prisons. Guards have immense control over prisoners’ lives, with inmates relying on them for food, safety, and housing, he said.

“When there’s a racial or homophobic bias, they really have no recourse,” Tupers said of the inmates. “The people in charge of their lives hate them.”

Experts noted that those participating in the conversations likely represent a small slice of corrections employees. Most others likely do not hold similar views, said Thomas Baker, corrections researcher and criminal justice associate professor at the University of Central Florida. Officers may not report on other officers, however, because some aspects of prison culture, like the aversion to “snitching,” bleeds into correctional staff culture as well, Baker said.

One group member whose name matches that of a current sergeant, but who did not otherwise identify on Facebook as a state employee, discussed in detail the medical circumstances related to a transgender prisoner’s transfer out of one facility. The poster discussed an exam he claimed to have been present for, including specific details about the inmate’s genitalia. The Illinois Department of Corrections has specific rules that prohibit employees from disclosing information related to offender’s records.

In response to a post from April, correctional officer Thomas Angeli, who goes by Tommy Angeli on Facebook, commented about transgender woman Janiah Monroe, who had recently been transferred to a women’s facility. “Saw her in healthcare when she first came in…dude looks nothing like a girl..a tall n skinny guy,” Angeli wrote. Later the officer expressed expectations that the inmate would have “something feminine” by way of sexual organs, but did not.

Correctional officer Glazik, commenting on a post from May about Hampton, wrote, “Hell, give him clemency….then the state can stop paying for the dumb bastard’s hormones and psych meds. He’ll never make it on the street!”

Injustice Watch is not naming commenters whom we could not independently verify were current or former corrections staff.