Update (April 16, 11:30 a.m.): After a third bond reconsideration hearing, Charles Thomas was released from Cook County Jail on Thursday morning, his 24th birthday, according to his family.

“He couldn’t even form a sentence,” Kathy Thomas said about her son, a former University of Chicago student who was shot by a university police officer during a mental health crisis two years ago. “I said, ‘Why don’t you just go lay down’ and he said, ‘I just want to hear you talk. Just talk to me.’”

But last Friday, Thomas was denied bond for a second time since mid-March, even though his attorney informed the judge that he had begun experiencing symptoms of COVID-19. He has been in the jail since October on a technical violation of electronic monitoring, after he suffered a second psychotic episode and was found in Indiana.

As the number of people in the jail infected rises almost daily, Thomas’s case raises questions about the factors judges and prosecutors have been considering as they determine who should be eligible for release. On Monday, the jail recorded its first death from the virus, and more than 4,500 people remain behind bars, with 263 confirmed COVID-19 cases as of Monday. Thomas’s attorney first requested a hearing on March 19 seeking his release on bond, as fears of the coronavirus spreading inside the jail were growing. By March 24, when Associate Judge Neera Walsh denied the motion, three detainees in the jail had tested positive.

Walsh said she felt that Thomas was a flight risk and that she would be more comfortable if he were in a locked, secure facility, according to Thomas’s father, Wendell Thomas. Because of the court closures that had already been put in place, Wendell was unable to attend the hearing and heard about the judge’s ruling from Thomas’s attorney, Alexander Weaver. The attorney did not respond to a request for comment.

After Walsh denied his bond, the other people on Thomas’s tier in Division 6 of the jail began getting sick, his parents said. Less than a week later, Thomas began feeling feverish and achy and had a dry cough, according to his parents. 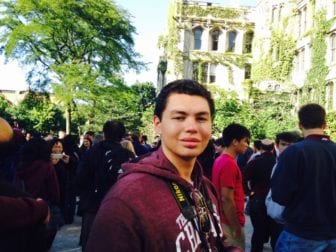 Charles Thomas, in an undated photo, was a student at the University of Chicago when he was shot by a university police officer in April 2018.

Although the fever subsided by late last week, he was still fatigued and he wasn’t acting like himself, his mother said. His cellmate was also sick and coughing, she said. When he called, she could hear coughing and moaning in the background.

“It was like if you could have been on the phone with someone on the Titanic when it was sinking,” Kathy Thomas said. “It was like, you could hear the whole unit was going down.”

The sheriff’s office has repeatedly said that any inmate showing symptoms is being tested. However, Thomas’s mother said that he had not been tested for the coronavirus.

In an email, a spokesman for Sheriff Tom Dart said Thomas’s tier was being quarantined because at least two inmates there had tested positive, but reiterated that anyone who is showing symptoms is tested and removed to isolation.

On Friday, Thomas’s attorney tried for the second time to get him released on bond. But Circuit Judge Peggy Chiampas denied the motion, according to court records. A spokeswoman for Cook County State’s Attorney Kim Foxx said in an email that prosecutors in Thomas’s case “support a recommendation for release if an alternative placement is found ensuring the defendant receives the necessary support and services outside of custody.”

Thomas’s attorney told his parents one of the reasons given was that the jail wouldn’t release anyone who had experienced COVID-19 symptoms anyway, his mother said.

“I think they think the damage is already done, he might as well stay in there,” Kathy Thomas said.

A spokesman for the sheriff’s office denied that they are preventing people with COVID-19 symptoms from being released.

“No one will be denied a court-ordered release simply because they are positive for COVID-19,” he wrote.

Thomas had no arrests or court involvement until the night of April 3, 2018, when he was shot by a University of Chicago police officer. According to news reports, someone called the police when they saw Thomas smashing car windows in Hyde Park with a metal tent stake. Police knew when they arrived at the scene that he was suffering from a mental health crisis, according to a lawsuit against the university filed last month. The officer shot Thomas when he failed to follow orders to drop the stake, police said. Although no officers were injured, Thomas was charged with aggravated assault to a police officer and criminal damage to property, both class-four felonies, the lowest level. After he was released from the hospital, he was put on pretrial electronic monitoring.

Last September, Thomas experienced another psychotic episode, according to his mother. His roommate reported him missing and police in Indiana found him several days later, naked and in a field, according to news reports. By leaving Illinois, Thomas violated the terms of his release; he was extradited to Chicago and held in jail without bond.

A court-appointed psychiatrist reported last month that Thomas was “legally insane” at the time of both his arrests and unable to “appreciate the wrongfulness and criminality of his conduct.”

His parents hope his case will now be transferred to a special mental health court, which would provide for his release from jail and intensive mental health treatment.

Thomas’s father, Wendell Thomas, said his son was “not crushed” by Friday’s ruling.

“He’s had very few wins in this whole thing, so he sort of expected it,” he said.