After weeks of civil unrest and protests over systemic racism and police brutality throughout the country, spurred by the police killing of George Floyd, we’re revisiting the Plain View Project database by talking with associate professor Leigh Raiford from the University of California at Berkeley. Raiford teaches African American studies and has studied the role visuals and photography have played in African American social movements.

Raiford’s book, Imprisoned in a Luminous Glare: Photography and the African American Freedom Struggle, explores both the role photography played in the lynching of African Americans, and how social movement organizers used imagery in the anti-lynching movement. Our conversation has been edited slightly for length and clarity.

Can we start with some historical context? How has the sharing of racist images and images of violence against Black people contributed to white supremacy in this country?

Visuals, broadly, have been a way to underscore white supremacy, to underscore ideas about hierarchy, about the imagined inherent biological racial differences. It has been a way to promote violence or promote dehumanization. We can go back to, in many ways, the founding of art history as a discipline. People like Johann Winckelmann, who in his position as librarian at the Vatican in the 18th century, started looking at Greek and Roman statutes and started to develop these ideas about ideal beauty based on these statuary. Specifically for Winckelmann, it was his love for the Apollo Belvedere. From there, there developed this linking of science and art and the categorization of human bodies, of human skulls that were imagined to hold truths that could then be visualized. These drawings of human skulls, the “beautiful” slope of the caucasian skull–literally a skull from the Caucasus, which is the way Caucasian comes to stand in for white. So there is this longer history of the visual as helping to underscore and prove racial difference and hierarchy. A lot of this is already established by the time photography emerges in the 1820s and 1830s.

There are already images as well of first encounters between Europeans and Indigenous peoples in Africa and the Americas that are re-instantiating myths about racial cultural difference and hierarchy. Then photography, as this imagined way of apprehending the true nature in its purest form, quickly emerges as a tool to visualize racial difference. With photography as well, we get abolitionist images that start to circulate of the survivors of slavery and the kinds of violences that they’ve endured. So, for example, there’s the famous image of the enslaved man named Gordon and his whip-scarred back that became an abolitionist tool.

Images of lynchings really emerged after the end of slavery as a mode of terror and control–primarily in the U.S. South, but lynchings were recorded in every state in the union. Lynching itself, as a form of violence, emerges after the Civil War and it coincides with the invention of the Kodak camera, allowing for amateur photography to emerge. I think there’s this particular confluence around lynching photographs as achieving a number of different aims toward underscoring white supremacy. After the forceful end of Reconstruction, we see the rebuilding of racial apartheid in the South. Lynching is the most violent form of that process. And the photographs emerge as a kind of cultural manifestation and extension of those practices. Even if you weren’t at the lynching you could still possess a souvenir from the lynching. You could still access that terror or that sense of control. A lot of lynching images were made into postcards and circulated as postcards up until about 1909 when the US Postal Service banned the sending of incendiary material through the mail.

What parallels do you see between the sharing of lynching images and some of the imagery shared by police and law enforcement on Facebook highlighted in the Plain View Project database?

Let me start by saying I cannot assume to know what’s in the mind of these police officers. I don’t know what’s in their minds or in their hearts. I can just say what I think the effect of those images are. The similarities I see is that in the sharing of any images, there is the building of a community. A shared community, a shared set of values, interests, language and culture. And that’s just inherent to the process of circulating photographs. I think both in the Jim Crow Era and in our current moment, the circulation and sharing of these images has the effect of building certain kinds of communities and policing the boundaries of community. Are you in or are you out? How do you see yourself? Do you feel seen, understood to be part of this community? And if not, then see your way out. What can we learn about the state of policing in America when we see officers sharing racist and violent imagery on public Facebook pages?

I think what the contemporary images and the proliferation of those images in the Facebook groups demonstrate for me is that the problem isn’t about individuals who find their way into policing, but that actually policing at its origins is an available and acceptable place for people who believe in white supremacy, who have these kinds of thoughts and ideas, to make a living. And that policing as a culture helps foster those ideas.

If we understand the Facebook posts as the kind of manifestations of police culture, culture is the story that we tell ourselves about ourselves. It’s the way that we understand, that we make meaning of our world. So it seems to me that this is fundamentally a culture that is historically rooted and perpetually remade through these kinds of images and through codes of silence and the like.

We cannot unsee the fact that policing as a structure is fundamentally about upholding racial capitalism and white supremacy.

Many of the posts in the Plain View Project specifically involved the mocking of people fighting for themselves, like protestors, oppressed communities, Black Lives Matter. What are some other examples of this happening throughout history?

In its early stages, social movement participants, particularly people who took to the streets, were pathologized as problematic, as undemocratic, as unruly because they were not going through the proper established channels to make change in a democratic society. Why aren’t you voting? Why aren’t you writing letters to your local politicians? There’s long been that history to pathologize, discredit and destroy social movement participants, specifically by law enforcement agencies.

One example is the FBI. Beginning with a young upstart named J Edgar Hoover, the FBI was intent on discrediting and destroying social movements by targeting leaders, by sowing dissent amongst leaders and participants, by circulating misinformation. We know this specifically through the FBI’s counterintelligence programs of the 1950s, 60s and 70s that emerged out of anti-communism.

The FBI hired its first Black agent specifically to infiltrate Marcus Garvey’s Universal Negro Improvement Association in the 1920s. That was also part of their need to supposedly root out foreign influence, foreign radicals, communists, Jews, and the like in the late 1910s and 1920s. 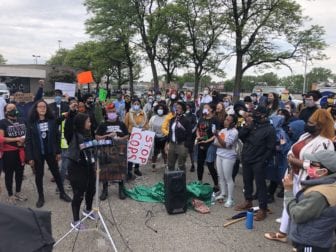 To give you an example, take the Black Panther Party, which we know was a target that the FBI went after quite aggressively. The tactics against the Black Panther Party not only included sending letters between Huey Newton and Eldridge Cleaver, sewing mistrust and paranoia, but also the circulation of coloring books and different materials that made them look bad. There was an instance where the local FBI agents in Miami, Florida, partnered with a local news outlet. Some panthers were going to show up on a talk show. They put the panthers on these low stools that were rickety, and wouldn’t tell them which camera to look at. The visual effect of it was to make them look shifty, uncomfortable, all these ways in which they looked shady and dangerous. It’s part of a larger culture and a larger set of historical tactics.

In recent years we’ve seen the proliferation of a new set of videos and images that show Black death. What has been the impact of this new wave of imagery?

On one hand, I think together they’ve made an accumulated visual record that makes it hard to deny the sheer numbers of those videos. That’s been one effect. One of the effects on Black people in particular, though, is that circulation has also meant increased levels of stress and trauma. Teju Cole called it “death in the browser tab.” The easy accessibility. If you’re watching YouTube and there’s auto-play, you have no control over the next video. Or if you’re scrolling through your Instagram or your Twitter feed and it shows up. That proliferation and accessibility in a way that we don’t actually have control over when they come, how they come, how we receive them.

I was really disgusted as I watched local news, especially, in the opening weeks of the protests. Every time they said, “and these protests were prompted by the death of George Floyd by police officers in Minneapolis,” they showed the video. Every fucking time. It was like, do better, be more creative. You don’t have to show this.

That said, I think that accumulation, that evidence is important. And I think increasingly what we’re seeing is that it’s important for people who have not been immediately impacted or affected by such violence to have a notion or to reckon with the reality.

When we talked last year for the In Plain View series, you had mentioned how Black communities had reclaimed or recast images that were once used to oppress them. How has that process worked throughout history, what did that look like?

Certainly lynching images have been, I wouldn’t say reclaimed, but they have been re-contextualized in history.

A lot of my thinking around this came around the Rodney King video. On one hand, growing up very clearly I saw it as police brutality. But it then became disaggregated and re-contextualized and framed in the courtroom. It was used as evidence of his dangerousness, that he refused to stay down, etc.

So I think there’s a sense that the images aren’t always stable. I think a lot of the memes that circulate today, that’s part of what makes it a meme. You can take an image and you can make it mean what you want it to mean with some text, re-contextualize it.

What’s been really interesting in the contemporary social movement, and what’s circulating in my space, is organizers not using the images of police violence as part of their framing of movements, but using these sort of more celebratory images of joy and struggle. And then also just sort of reframing and re-centering white and police participants. Those have been some of the kinds of distinctions.

So, for how these images are being used today, you’re saying you’re actually seeing people not using them. They’re choosing different images?

Yes. For example, the Movement for Black Lives, they’re explicitly not circulating the images of George Floyd’s murder, or whoever’s murder. And that to me seems like a significant shift. We know they exist, we know what they look like. And we also know the trauma and distress that they cause Black people to see them. So we don’t need to actually post them. It’s not on us to prove that these things happened.