Another Chicago City Council member has confirmed their plans to run for Cook County judge in the June 2022 primary election.

Ald. Howard Brookins Jr. (21st Ward) said Tuesday in an interview with Injustice Watch he intends to campaign for one of the open countywide seats on the Cook County Circuit Court.

“I’ve been splitting my time between the practice of law and being a city council member, and I have never been one to think that I would die in office,” said Brookins, who was first elected alderman in 2003 and chairs the city council’s Committee on Transportation and Public Way. “I think that this would be a wonderful opportunity to continue to serve the public.” 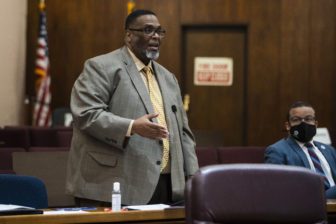 Chicago alderperson eyes a seat on the bench in 2022 election

West Side Ald. Chris Taliaferro, a former police sergeant, wants a seat on the 11th judicial subcircuit, which covers parts of Chicago's West Side and nearby suburbs.

Brookins, whose South Side ward includes parts of the Auburn Gresham and Washington Heights neighborhoods, graduated from the Northern Illinois University College of Law in 1988. He worked briefly in the Cook County public defender’s office and the Cook County state’s attorney’s office, as well as for the Illinois attorney general. In the early 1990s, he started a private criminal defense practice with Thaddeus L. Wilson, currently a Circuit Court judge in the criminal division who is up for retention in next year’s general election.

In 2017, Brookins announced he was running for the Second Subcircuit judicial seat left vacant by former Judge Valarie Turner, who was forced to retire in the wake of revelations that she’d let a clerk wear her robes and take the bench in her stead. (Turner later revealed that she’d been diagnosed with Alzheimer’s disease.) But Brookins failed to collect enough valid nominating petition signatures to stay on the ballot.

He’s not the only alderperson eyeing the bench in 2022. In August, Injustice Watch reported that his colleague, West Side Ald. Chris Taliaferro (29th Ward) also had his sights on a judicial seat in the 11th Subcircuit.

The Cook County Democratic Party is hosting a pre-slating event Thursday to give interested candidates a chance to pitch themselves for the party’s backing in the primary election. The slating — a process in which the party officially nominates candidates for elected office — is scheduled for December.

Brookins said he’s hopeful that his “background and credentials and experience” would earn him a spot among the slated candidates to appear on the Democratic primary ballot in June. He  is also the 21st Ward committeeman and serves on several judicial slating committees for the Cook County Democrats. He said he will recuse himself from the nomination process and give his vote to a proxy as he seeks judicial slating but added with a laugh, “It would be highly unusual if they didn’t vote to slate me.”

Last year, the Chicago Board of Ethics fined Brookins for representing former 1st Ward Ald. Proco “Joe” Moreno in a drunken driving case. The board found that Brookins had violated ethics rules because he was representing a client in a criminal case investigated by the Chicago Police Department while he was an employee of the city.

Brookins challenged the ethics board decision in the circuit court and is currently awaiting a ruling in that case from Judge David B. Atkins.

“I’m very optimistic the judge will rule in my favor,” Brookins said. “I think that [the ethics board] overstepped. … It wasn’t a conflict.”

​​Judicial candidates can start collecting petition signatures Jan. 13, with a deadline to turn them in to the Illinois State Board of Elections by March 14. The primary election is scheduled for June 28.