On Monday, a federal appeals court dismissed a defamation lawsuit filed by a Philadelphia police officer against Injustice Watch over a Facebook comment of his published in the Plain View Project, a database of police officers’ potentially problematic social media posts.

The lawsuit was filed in 2019 by D F Pace, a high-ranking officer in the Philadelphia Police Department, who commented on a post by a fellow officer that mocked an American college student who had been arrested by North Korea’s oppressive regime.

Pace had argued that the inclusion of his comment in the Plain View Project, a collection of Facebook posts from more than 3,500 current and former law enforcement officers from across the country that included violent, racist and misogynistic language and imagery, falsely made him out to be a bigot.

The decision by a three-judge panel of the U.S. Court of Appeals for the 3rd Circuit concluded that Pace failed to prove “actual malice” by Injustice Watch and Emily Baker-White, the attorney who created the Plain View Project. Actual malice is the high legal bar set out by the U.S. Supreme Court for a public figure, such as a police officer, to prevail in a defamation case against a news organization. 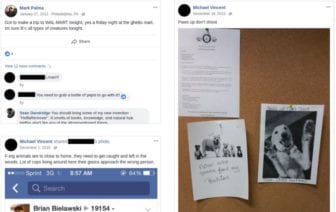 Baker-White, who was also named in the lawsuit, shared the Plain View Project database with Injustice Watch, which did its own reporting on the posts and Baker-White’s findings and published a series of stories beginning in June 2019. Although Injustice Watch did not include Pace’s comment in any stories, the organization was sued as the Plain View Project’s fiscal sponsor.

In a statement, Injustice Watch Executive Director Juliet Sorensen said the court’s ruling “is an affirmation of the rigorous investigative journalism and high standards of Injustice Watch.”

“The Plain View Project exposes deeply troubling currents in social media by those who are sworn to serve and protect,” Sorensen said. “This ruling affirms the methods and reporting done by our team, and sends a clear message about the enduring importance of a free press.”

Pace and his attorney did not immediately respond to requests for comment.

Pace is a 20-year veteran of the Philadelphia Police Department and currently serves as the commanding officer of the department’s internal disciplinary board, according to his lawsuit and LinkedIn profile.
In March 2016, Officer Anthony Pfettscher posted on Facebook about the case of American college student Otto Warmbier, who had been arrested in North Korea and tried for allegedly stealing a propaganda poster.

“I’m cracking up…He is crying and pleading like a little baby girl because he was just sentenced to 15 years hard labor,” Pfettscher wrote. “Although my heart breaks for his family, it’s an eye opener to how spoiled and coddled our youth of today are here in this weak PC country.”

Warmbier died about a year later, after he was returned to the U.S. in a vegetative state.

Pace claimed that the inclusion of his comment in the Plain View Project database put him in a false light and defamed him by suggesting he belongs “in a set of current and former police officers who endorse violence, racism and bigotry.” A screenshot of the Facebook comment by Philadelphia police officer D F Pace as it appeared in the Plain View Project. Pace's defamation lawsuit against Injustice Watch was dismissed by a federal appeals court.

Judge Wendy Beetlestone of the U.S. District Court for the Eastern District of Pennsylvania dismissed Pace’s original lawsuit in January 2020.

On appeal, circuit court judges Thomas L. Ambro, David J. Porter and Jane R. Roth rejected Pace’s argument that no “reasonable journalist” could have concluded that his comment was anything other than “innocuous” and “non-violent.”

“Although we express no opinion about how Pace’s comment should be interpreted (let alone what he actually intended it to mean), a journalist could interpret his comment as expressing support for harsh criminal penalties in response to protected speech, which might ‘undermine public trust and confidence’ in police,” the judges wrote.

Injustice Watch’s reporting on the Plain View Project database was recognized with the University of Oregon’s Ancil Payne Award for Ethics in Journalism and was a finalist for the Online News Association’s Knight Award for Public Service. The reporting also spurred a congressional subcommittee to open an investigation into the eight law enforcement agencies whose officers’ posts were included in the database. Hundreds of police officers were disciplined – and dozens were suspended or fired – because of posts that appeared in the Plain View Project.