This story was co-published with the Chicago Sun-Times. Participants in the company, called Table of Wisdom LLC, say it’s an investment club formed by a group of longtime friends who regularly met for breakfast and decided to pool their money so they’d have something to talk about.

Two of the partners in Table of Wisdom are sitting circuit court judges: 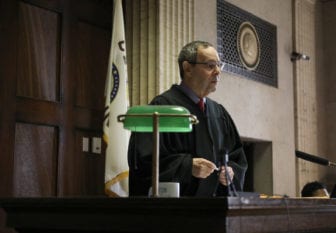 But Illinois law warns of the potential for conflicts of interest when judges go into business with attorneys. Judges should refrain from financial and business dealings that “involve the judge in frequent transactions with lawyers or persons likely to come before the court on which the judge serves,” according to the Illinois Code of Judicial Conduct.

Table of Wisdom reflects the court system’s reputation as being largely white, older men with financial and personal ties to each other and the Democratic Party. Of the ten partners Toomin disclosed in forms submitted to the Illinois Supreme Court, the nine that could be identified are white and all but one are men.

Table of Wisdom was incorporated in May 2018, according to filings with the Illinois Secretary of State’s office. Leavitt is the group’s registered agent.

Leavitt’s law firm was the third-highest contributor to the political action committee set up to retain Cook County judges, giving a total of $20,260, as of 2018.

Kulys Hoffman, who retired from the bench last year, said Table of Wisdom is an  investment club. She wouldn’t say how much money members were expected to contribute to the investment fund and said she doesn’t know whether the group is still active.

Though Table of Wisdom filed its annual report in May with the Illinois secretary of state’s office, Steigel said the company disbanded earlier this year over “disagreements” on where to invest.

Steigel said Leavitt was the group’s founder. A former circuit and appellate judge who served on the Illinois Appellate Court with Burke’s wife, Illinois Supreme Court Justice Anne Burke, Leavitt returned to private practice in 2002. He practices family law as a founding partner of Grund & Leavitt.