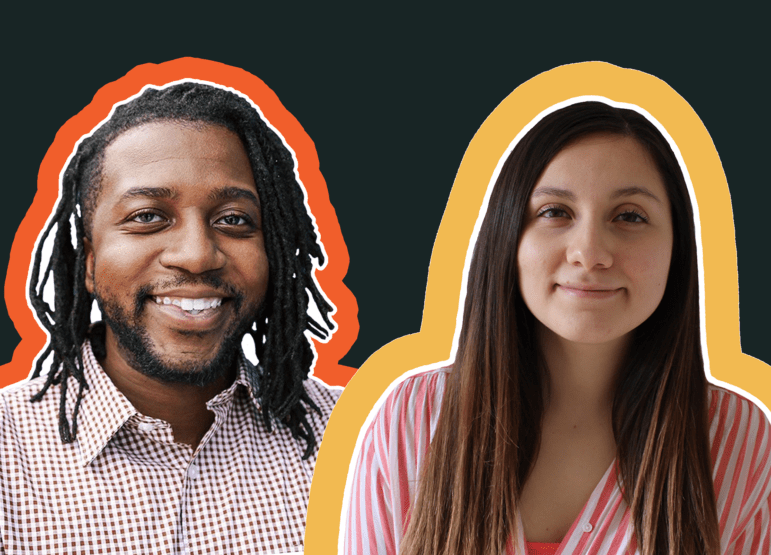 Injustice Watch added two reporters to its team over the past two months: Josh McGhee and Rita Oceguera. Both reporters previously worked at The Chicago Reporter and have roots in Chicago’s suburbs. Josh grew up in Tinley Park, while Rita hails from Aurora.

Josh, also a former DNAinfo Chicago reporter, arrived in early December. He has been busy reviewing Cook County bond court decisions, reporting on the county’s juvenile detention center, and crunching data on judges and sentencing disparities for The Circuit, our collaboration with the Better Government Association and Datamade.

Rita, a Report for America fellow, started in early January. She’s helping expand Injustice Watch’s coverage of policing and courts into the suburbs, contributing to our immigration beat with reporter Carlos Ballesteros, and supporting our audience engagement efforts to establish relationships with and better listen to Latino communities in the suburbs.

In an interview with Editor-in-Chief Adeshina Emmanuel, Rita and Josh discussed what issues they’re covering, how they’re making sense of 2020, what public service journalism should look like in these times, and more.

You can read their conversation below.

Have a tip for our new reporters?

You can also email [email protected].

Adeshina: Fun fact: both editor Jonah Newman and I worked at The Chicago Reporter together years ago, and it was pretty trippy that we both landed at Injustice Watch in Fall 2019. Both of you also came here from the Reporter. How does it feel to be working together again with so many TCR alums?

Rita: I’m excited to be here. It’s really important to have a support system that knows how difficult it is to begin as a young reporter and as a reporter from a marginalized background. I’ve only been here for a little more than a month, but I’ve gotten so much feedback and support and direction about what I will be doing and what will happen. It seems exciting every day. I’m just excited to wake up, do work again, learn about something new, research something that I didn’t know about, and then tell everyone else about it.

Josh: It’s amazing to be part of the illustrious alumni network of TCR. One of the beautiful things now at Injustice Watch is we have so many alumni. We get to continue to do the type of work that made The Chicago Reporter so fascinating and make our fellow alumni proud as we look at inequality across Chicago. We have an opportunity to continue that work with more reporters than we had at The Chicago Reporter. Adeshina: Welcome! Next, I want to ask a big question that many an Injustice Watch reporter has faced: What injustice are you watching?

Josh: I am watching the daily interaction of policing and the courts in bond court. These daily proceedings, now occurring via Zoom, illustrate the policing of minor infractions and how the justice system handles them.  Over the last decade, we’ve seen vast changes in public sentiment and the law surrounding things like marijuana and opioids. I hope to take a data-based approach to look at how these things have played out and are playing out. There’s still a lot of policing of marijuana in Black and brown communities, even as the state has legalized pot. And there’s still a lot of residual harm from the War on Drugs not being addressed. I’m also looking into the harms of juvenile detention.

Rita: Something I want to do is bring you more stories from Latino immigrant communities. Often immigration is only looked at as deportations or DACA, and I—we—want to showcase the resilience of people and immigrants who come here and how they cope with this American system that isn’t fit for a lot of them. There’s a lot of obstacles that they have to go through. I also really hope to bring some suburban context to issues that are happening in Chicago. I am interested in looking at suburban police budgets and seeing how the money put into suburban budgets is being used to police communities of color and immigrant communities. I’m excited to collaborate with other publications to see how we can create this network of data and stories from people living in those communities. Adeshina: What are the benefits of that broadened regional view?

Rita: I think creating a broader regional view showcases that many communities’ problems are more of a systemic issue. It’s not just based on location. I know a lot of people in the suburbs are like, “Oh, the shootings happen in Chicago. That’s in Chicago. It doesn’t happen here.” But I know many people have experienced a lot of injustice here in the suburbs and had difficult situations with the police. And maybe the problem is better than in Chicago, but still not good, or not good enough. I want to look into what suburbs are doing around policing that’s better, and what they are doing that’s just as bad as the problems we see in Chicago. It needs to be brought into the spotlight that policing issues are also happening in their community.

Adeshina: You both hail from suburban Chicago. How would you all say that your experiences growing up in the Chicago suburbs inform the work that you do? Chicago Rep. Jesus “Chuy” Garcia is leading a push to reverse decades of punitive policies that land thousands of immigrants in detention each year after coming into contact with the criminal justice system.

Josh: I understand that none of us, regardless of our race or demographics, have a monolithic experience, and I think it’s important to know that across Cook County and Chicago that there are different people of color and different communities around here. Systemic oppression of people of color doesn’t just happen on the South or West sides, injustices are happening all over Cook County, but everyone’s experience is also different. I’m a person from the suburbs. I’m a person who’s also gone to the South Side every weekend to see my grandmother and my cousins and hang out.

Rita: I agree. I grew up in a very Latino suburb in Aurora, Illinois. I’ve also gone to school at Northwestern University and lived in Evanston for four years. I’ve seen so many differences in different suburbs and places outside Chicago. I’m still realizing that people of color in other suburbs face many of the same issues that exist where I grew up. It doesn’t matter where you’re at. People of color, wherever they are, or any marginalized community, face a lot of issues. Newsrooms are moving away from privileging police accounts over those of police violence victims.

Josh: I think that there’s a lot of noise that we get about what’s happening today, but there’s not much explanation of why. This is an opportunity to do public service journalism that allows us to explain the why and look at the how. I think Injustice Watch’s In Plain View investigation into law enforcement’s problematic social media behavior provided one of those moments in 2019 for people to peek behind the curtain and see what police officers are doing outside of work.

People have questions about the Capitol attack, like, how did all of these people just invade the Capitol? What happened? Why are there pictures of police taking selfies with the people who are invading or taking over the Capitol? But that context has already been provided, and I think we have to continue to work to keep putting these things in context, with more reporting on things like cops’ social media behavior or how the contracts with police unions and union leaders affect police accountability and the culture of policing. I’m a big fan of the judicial election guide because if you want to shape the future, you have to have the tools so that you can do that. And I think that the judge’s part of the ballot is something that people often skip over, not realizing how big of an impact they can have.

Rita: As journalists in service to the public, it’s really our job to be as transparent as possible. And you have to be really truthful about what’s happening. You can’t coddle people anymore. We have to tell them how it is and then engage with them and learn. We have to try and figure out the best ways to give them information and see what they want to know more about, get their feedback, and do the public service journalism that they need and want.

Like Josh, I’m also a big fan of the judicial election guide. You would think that information about judges would be readily available for everyone. But even if you Google and try and find out about judges, it’s really hard to figure out who’s running and what they stand for. So having a guide is super helpful, especially now that the guide is also in Spanish. Often, if you have Spanish-speaking parents, you have to explain something like that to them yourself personally. And then you’re taking on the responsibility of not only your vote but the votes of others. So it’s beneficial to just kind of alleviate that and help them make their own decision and choose what they believe in. Adeshina: We’ve talked a lot since the uprisings against police violence and racism began about centering communities most impacted by injustice and listening better. How are you all planning to do that at Injustice Watch, especially during a pandemic that makes it harder to connect with people in person?

Josh: We still have to have conversations. Maybe we use surveys, maybe we actually use the mail, but we have to be innovative with how we can get these conversations going. Just getting into those communities in different, innovative ways and letting them talk and hear feedback on our work and what our work should look like.

Rita: I think innovation is key. Our audience has changed. They’re on social media. They don’t have the time capacity. Their days are quick, they’re moving fast, and we need to innovate different ideas. We have to see what they want, what is the best way for them to get the news and engage with those communities that don’t trust the media anymore. We must learn why they don’t trust the media and see what we can do to better our relationship with those communities.

Josh: I’m excited to get deeper into the work. I know that this is going to be a learning experience for me. Still, I hope that we can educate readers and that the readers feel inclined to educate us about what we need to know to do the reporting about the issues that people don’t know about.

What issues matter to you? What stories are we missing? Use the form below to tell us how we can do better. We’re listening.